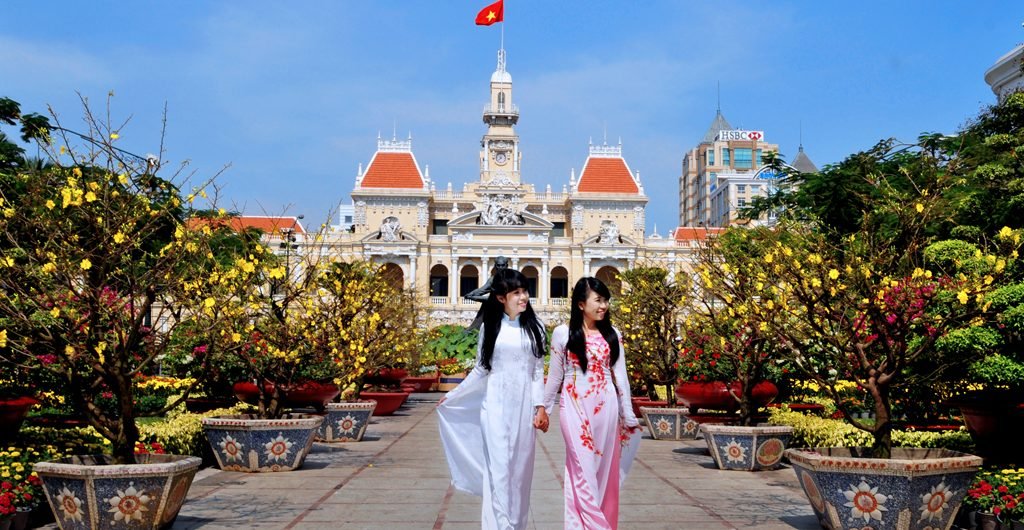 Top 10 hopon-hopoff tours in  Ho Chi Minh City, or also called Saigon, is the largest city in Vietnam. Thanks to its lively vibe, a cosmopolitan population and a nice combination of shopping malls and markets, the city has started to have its secrets and beauty revealed to the world, becoming a good chance for a number of tourists to discover and experience the beauty.

From classic French architecture to perfectly maintained American war planes, walking around Ho Chi Minh city is like seeing the past life coming to lives with so many famous places of interest scattered throughout the city. Of course, as Vietnam’s biggest city and business capital, times are changing and modern skyscrapers are starting to punctuate the sky thus combining the new and the old in a unique Vietnamese way.

With  Hop On Hop Off City Tour, you can go to many top tourist attractions and we ensure you don’t miss any of  this fascinating spots that this city has to offer.

Pham Ngu Lao Street in Ho Chi Minh City is on the western edge of District 1 and is renowned as Backpackers Zone where most backpacking travelers stay during their holiday. It comprises of numerous lanes and back alleys though the main thoroughfares include Pham Ngu Lao, De Tham, Bui Vien, and Do Quang Dao streets. Set along these alleyways are western-style restaurants, coffee shops, and international bars, countless tour companies and kiosks, affordable motels, hostels and guesthouses, pharmacies, and souvenir-and-craft shops.

Directions to Stop 1: From the entrance in Le Lai street or Pham Ngu Lao street, customers follow the walking way to go to the waiting area and wait for Hop On Hop Off bus number 120.

Built in 1870 by the French, Ben Thanh market was initially called Les Halles Centrales before being renamed Ben Thanh in 1912. Ben Thanh Market has long been a symbol of the city. It has experienced many ups and downs throughout its history, and is now the oldest surviving market and one of symbols of Ho Chi Minh City. Currently there are over 3,000 market stalls, wholesalers, retailers from food, everyday objects to luxury goods.

Bitexco Financial Tower is a skyscraper in Ho Chi Minh City, Vietnam, with 68 floors and offers visitors an unparalleled city view from its Sky Deck on 49th floor. The Sky Deck delivers breathtaking 360 degree panoramic views across the city and the Saigon River. Facilities include a gift shop, information touch screens (in English and Vietnamese), free to use binoculars and complimentary bottled water.

Direction from stop 3 to Skydeck: get off at stop 3, cross Ham Nghi street to go to Skydeck (the tall building has Lotus shape)

Bach Dang Pier includes harbor and Bach Dang park. It is located beside Saigon River. It has long become an interesting destination of city residents and tourists while visiting Ho Chi Minh city. Total length of Bach Dang Pier is 1.3 km with total area is about 23.400 m2 and a green space of city.

City Hall, known as The People’s Committee Building of Ho Chi Minh City is located at one end of Nguyen Hue Street, one of the most beautiful streets in this metropolis. The building was built and put into use in 1909 as a hotel whose original name was Hotel de Ville. This building is thus one of the oldest biggest and most beautiful French style buildings in Ho Chi Minh any, functioning both as a city institution and as the city’s most prominent landmark today.

Direction from Stop 5 to City Hall: get off at stop 5, go straight to the end of Nguyen Hue Street.

Saigon Opera House. Gracing the intersection of Dong Khoi Street and Le Loi Boulevard, this grand colonial edifice with a sweeping staircase was built in 1897 and is one of the city’s most recognizable buildings. Officially known as the Municipal Theatre, the Opera House captures the flamboyance of France’s belle époque. The applied ornament, balustrades, cartouches, and roof were imported directly from France. Today, renovated with new materials, the theatre is equipped with state-of-the-art electric appliances, lighting and sound systems, and safety equipment. Opera House becomes a theater for a variety of Vietnamese traditional and classical performances, which attracts visitors in Vietnam travel.

Nguyen Hue pedestrian street
Nguyen Hue pedestrian street runs from the People’s Committee Building of Ho Chi Minh City to the Saigon River. A total rebuild has made it a pedestrian walking street. This is considered the heart of District 1 with many beautiful buildings, hotels, restaurants. Flowers, trees, indirect lighting, statuary displays and a new Ho Chi Minh statue are the highlights. During TET (Lunar New Year), various flower exhibitions and displays are highlighted in the area.

The Independence Palace (or Reunification Palace) is a unique architectural work by Architect NGO VIET THU. The construction began in 1962 and completed in 1966. Originally the site of the Nordom Palace also known as the Governor’s Palace, its first role was as a home and workplace for the French Governor of Cochinchina. This place was the residence and working place of the President of the Republic of Vietnam. Nowadays, The Reunification Palace is a popular Historical Relic in Ho Chi Minh City and visited by many foreign and domestic tourists. This place has also been used for the Government’s meetings and receptions.

Notre Dame Cathedral was built up in three years and was completed in 1880. This is a religious building characteristic architecture from the French colonial period. For over 100 years and across three centuries, Saigon Notre-Dame Cathedral, the official name is the Basilica of St Mary the Immaculate Conception was splendid, magnificent and majestic; is considered a masterpiece of urban architecture of Saigon. Notre Dame is a typical work made up the face of urban architecture in Saigon – Ho Chi Minh City.

Central Post Office is located left Saigon Notre-Dame Cathedral. The building was constructed between 1886-1891 when Vietnam was part of French Indochina. It counts with Gothic, Renaissance and French Influences. Saigon Central Post Office is a project to bring the skillful combination between European style with Asian decor. After more than 100 years, this place remained out of power while building. Here, apart from sending a postcard, phone call, you can visit, shop and take pictures.

History Museum Check out displays of stone tools, Roman coins, cannons and items from Vietnam’s ethnic minorities, The National History Museum is housed at the end of Le Duan Street. The building was built in 1929 it mainly exhibited ancient Asian art collections and after 1956, when it was renamed the Saigon National Museum. Expanded in 1975, the museum became the haven for Vietnamese history that we use today.

The Zoo
As one of the oldest zoos in the world, the Saigon Zoo and the Botanical Garden is famous not only for the Vietnamese but also for the foreign visitors. It is a home for many rare orchids, ornamental plants, and over a hundred species of mammals, reptiles and birds. Saigon Zoo and Botanical Garden is a cultural place of Ho Chi Minh City (Saigon). It was ranked eighth among the oldest zoos in the world. it is 150 years old.

The War Remnants Museum is located in District 3, Ho Chi Minh City, functions as a place to display devastation remnants of the war between 2 countries from 1961 to 1975. It comprises of several sections of rooms in the multi storey building storing military equipment, as well as disturbing photographs about the traumatizing consequences of Agent Orange, napalm and phosphorus bombs. There are also pictures about atrocities such as My Lai massacre, a guillotine used by Southern Government of Vietnam. Not only does the museum illustrate a phase of painful history, but it also tells unknown stories about the war to the visitors.